Scientists at Linkoping University, Sweden working with the perovskite family of materials have taken a step forward and developed an optoelectronic magnetic double perovskite. The discovery opens up the possibility of coupling spintronics with optoelectronics for fast and energy-efficient information storage.

Perovskites are a family of materials with many interesting properties: they are cheap to manufacture, have excellent light-emitting properties, and can be adapted for different applications. So far, researchers have concentrated on developing variants for solar cells, light-emitting diodes and fast optical communication.

Perovskites can consist of many different organic and inorganic substances, but they are defined by their specific cubic crystal structure. Recently, a type of perovskite containing halogens and lead has been shown to have interesting magnetic properties, which opens up the possibility of using it in spintronics.

Spintronics is the field of technology in which information about the direction of rotation of a particle (its spin) is stored, not just about its charge (plus or minus). Spintronics probably has great potential for the next generation of information technology, as information can be transmitted at higher speeds and with lower energy consumption.

However, it turned out that the magnetic properties of halide perovskites have so far only been associated with lead-containing perovskites, which has limited the development of the material for both health and ecological reasons.

The scientists at Linkoping University, together with a large group of colleagues in Sweden, the Czech Republic, Japan, Australia, China and the USA under the direction of Professor Feng Gao from LiU, have now managed to produce a harmless perovskite alloy magnetic double perovskite.

In an article in Science Advances, they show that magnetic iron ions, Fe3 +, are built into a previously known double perovskite with interesting optoelectronic properties and consist of cesium, silver, bismuth and bromine, Cs2AgBiBr6.

The researchers have shown in experiments that the new material shows a magnetic reaction at temperatures below 30 K (-243.15 ° C).

“These are preliminary experiments from an exploratory study, and we’re not entirely sure where the magnetic response was coming from. However, our results suggest that this is likely due to a weak ferromagnetic or antiferromagnetic response. If so, we have a whole Class of new materials for future information technology, but more research is needed, not least to preserve the magnetic properties at higher temperatures, “says Feng Gao.

“Perovskites are exciting materials and they have great potential for use in future products that require cheap and fast information transfer,” he says. 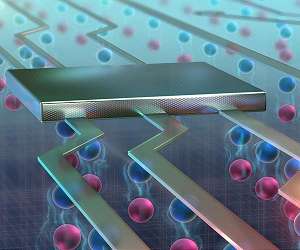 Solar cells of the future


Organic solar cells are cheaper to manufacture and more flexible than their crystalline silicon counterparts, but they do not offer the same level of efficiency or stability. A group of researchers under the direction of Prof. Christoph Brabec, director of the Institute for Materials for Electronics and Energy Technology (i-MEET) at the Chair for Materials Science and Engineering of the Friedrich-Alexander-Universität Erlangen-Nürnberg (FAU), has been working for several Years of improving these properties. During his … read more

Three Methods to Play the $30 Trillion ESG Increase in 2021

Clear Power Funding Must Triple by 2030 to Meet Local weather...

Aptos Solar Expertise and NEP Be a part of Forces to...