Rows of trucks carrying piles of stones through Finland’s rugged Terrafame mine, 300 km below the Arctic Circle and Europe’s largest source of nickel for electric car batteries.

On the huge, 60 square kilometer site, the extracted stone is crushed, heaped in huge mounds and fed with oxygen and water through red tubes so that the nickel can gradually leach out together with a little cobalt.

“Even today, more than 50 percent of our sales come from the electric vehicle value chain,” Joni Lukkaroinen, CEO of Terrafame, told AFP.

Finland is the only EU country whose bedrock is known to contain all of the major battery minerals – including cobalt and lithium – and the Nordic nation plans to use these resources to become a major player in the industry.

However, the prospect of increasing mining is controversial in sparsely populated Finland, whose vast forests, diverse wildlife and pristine lakes are a national asset.

As Europe wants to counter the dominance of Asia in the fast growing sector, Finland is one of the most active member states fighting for a share of the lucrative battery business, but competition between EU countries is fierce.

The Finnish government has promised € 300 million in incentives for the battery industry this year, and seven new excavation sites are among the commercial projects currently under way to create a “battery cluster”.

Mika Nykanen, who is in charge of developing the government’s “battery strategy”, said the Nordic country’s approach will be “heavily based on sustainability and Finland’s climate policy goals”.

However, activists fear that mining expansion in Finland will destroy fragile ecosystems.

“You just can’t produce these minerals in an environmentally friendly way,” activist Antti Lankinen told AFP, who was standing in front of a towering pile of stones on the edge of the Terrafame site in Sotkamo, central Finland.

Lankinen has worked with the Finnish Conservation Association to force Terrafame to change the way the waste rock is stored. This can lead to acid runoff into the adjacent landscape when exposed to rainwater.

The mine’s previous owner, Talvivaara, was prosecuted following an ecological disaster in 2012 when uranium and other toxic metals leaked into local waterways.

However, Joni Lukkaroinen, CEO of the new owner Terrafame, said there had been no environmental issues since his company took over the mine five years ago.

“We have an environmental impact, but that impact is in line with our permits,” said Lukkaroinen.

In other parts of Finland, campaigns against new mining have emerged in Lapland and the Saimaa Lake District, a tourist hotspot known for its unique wildlife.

“Lake Saimaa is Europe’s fourth largest freshwater system and not a suitable area,” activist Miisa Mink told AFP, adding that four new prospecting permits have been issued in the area since May.

“If we’re not careful we will certainly have electric cars, but we will not have fresh water.”

However, the battery industry leaders insist that Finland is a global pioneer in sustainable practices and believe this gives it an edge over its competitors.

Meanwhile, according to NGOs, Finnish mines are bound by much stricter standards than in the Democratic Republic of the Congo, where more than half of the world’s cobalt is produced under conditions characterized by child labor and human rights violations.

“There is no point in buying an electric vehicle made from raw materials that are not sustainable,” said Matti Hietanen, CEO of the Finnish Minerals Group.

Although Finland recently lost to Sweden to host Northvolt with its US $ 1 billion gigafactory, which was co-financed by Volkswagen, other foreign companies are choosing a location in Finland, including German BASF and Belgian Umicore.

Terrafame will also open a € 240 million refinery next year that will produce enough nickel sulfate for 1 million electric vehicles and cobalt sulfate for 300,000.

Auto technology maker Valmet Automotive is one of the few Finnish manufacturers at the top of the battery chain and opened a plant last year to expand production of ready-made battery packs for use in automobiles and industrial vehicles around the world.

Nurmi believes that one area in which the company can distinguish itself is in “off-highway” production – batteries for heavy-duty vehicles used in construction, agriculture or logistics.

Some industry watchers say global supplies of cobalt, the most expensive of battery minerals, are already depleted and will no longer expand to meet future demand.

“We need materials from the ground, but I think in the future a lot of our materials will be created through recycling,” said Nurmi, adding that he is optimistic that his industry will become increasingly sustainable.

“It will take some time,” he said, “but it will change in the future”. 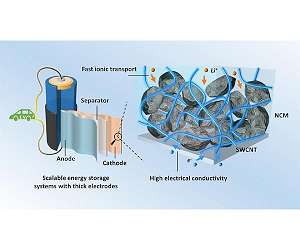 
Lithium-ion batteries are the primary rechargeable energy source for many portable devices as well as for electric vehicles. Their use is limited, however, since they do not offer high power output and at the same time enable reversible energy storage. Research published in Applied Physics Reviews by AIP Publishing aims to offer a solution by showing how the inclusion of conductive fillers improves battery performance. The optimal battery design includes thick electrode structures. This improves the … Read More