A new report from GOGLA attempts to examine in depth the relevance of the hybrid AC-DC energy infrastructure (HAD) in India to provide insights into how energy efficient devices can be integrated into the power grid. It believes that while HAD is an emerging consumer need and market for the DRE sector, it is also related to the initiatives of the Government of India and hopefully will innovate and improve market uptake.

India is strong in achieving universal access to electricity with almost 100 percent electrification coverage by 2019. The national network has played a very important role in improving this access, but its reliability remains a challenge, especially in semi-urban and rural areas and remote areas. Distributed Renewable Energy (DRE) in the form of solar roofs (SRT) and solar house systems (SHS) combined with efficient equipment helps improve the reliability of the service and is increasingly adopted. According to some estimates, there are approximately 4 million households (HHs) in India (1.4 percent of the 277 million HHs in India) with some form of SRTs or SHSs.

Many of the SHS previously used were stand-alone systems that supply AC and / or DC devices with energy storage. Today there is a new class of DRE solutions, commonly referred to as hybrid solar systems, which can integrate solar energy into AC grid (unidirectional or bidirectional) and provide power to AC and / or DC devices. Such new hybrid AC-DC power supply (HAD) solutions can help users reap the benefits of solar power – by improving supply hours and reducing energy costs for their Power Distribution Company (Discom). In India, an estimated 0.8 million units of solar hybrid inverters or uninterruptible power systems (UPS) were sold in 2019 (compared to around 8 million units of conventional inverters) and an increasing trend is expected.

It adds that more and more power system and device OEMs and system integrators are joining this fast growing HAD market in India. There is a new class of efficient devices (including lamps, light bulbs, fans, televisions, refrigerators, washing machines, pumps, etc.) that use basic DC LED or BLDC motors and can operate on AC and / or DC power. Some other innovations in devices include embedding energy storage in the device to avoid the need for costly centralized backup power solutions. These innovations on the appliance side will further drive the increasing need for a HAD infrastructure for the synergistic coexistence of AC and DC.

In the paper, the HAD infrastructure was analyzed in detail from two points of view: a) Supply side: side of the emergency power supply solution by combining grid, solar and battery storage and b) consumer side: device side by enabling devices Work with both AC and with DC power supplies.

The following customer segments are expected to drive demand for HAD solutions from a supply perspective:

Hybrid grid-tied inverters will then be launched in the Indian market, but growth is expected with increasing SRT installations. This demand will initially come from cities and state institutions. However, the high up-front costs and lack of consumer awareness of new technologies can be a limiting factor in reaching high volumes.

In addition, from the device point of view, two new categories of energy-efficient (EE) HAD devices are emerging on the market, one with two inputs and one with an integrated battery. Hybrid devices are currently two to four times more expensive than traditional AC devices. However, as the technology becomes more popular with both original equipment manufacturers (OEMs) and consumers, it may become more affordable. Hybrid light bulbs and fans are expected to be the first devices to become inexpensive.

The market for hybrid devices with a single input (mainly AC) and an integrated battery is in its infancy. Because of grid electrification, there is untapped potential for such devices, especially in areas where power supply from the grid is unreliable. As the price of battery storage continues to fall and new technologies emerge, hybrid devices can become an alternative to traditional UPS systems, especially for lower-income consumers or among consumers below the poverty line (BPL). However, the inclusion of hybrid devices with an integrated battery may be limited in HHs that already use conventional or solar UPS solutions.

In order to further strengthen the HAD infrastructure in India, the following key recommendations were made in the report: 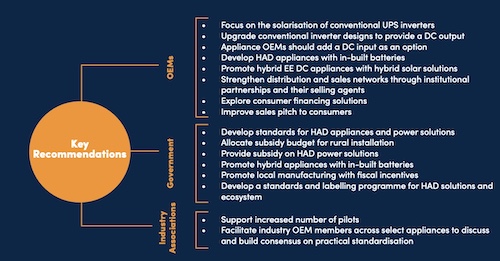 The report concludes by stating that the market is clearly heading for hybridization, the integration of AC-DC power supplies and devices that support these systems. However, challenges such as high up-front costs for devices, high sales costs, low customer awareness and a lack of standardization are a recognized reality. However, these factors should not prevent the off-grid players from diversifying HAD solutions and offering them to their customers. Key industry stakeholders such as OEMs, governments and industry associations will play important roles in addressing these challenges and in growing HAD infrastructure in India.