In order to build a structurally more stable sodium ion battery, a team of researchers from South Korea and the United States took inspiration from mammalian bones and their multilayered geometry.

Sodium-ion batteries offer a number of advantages over lithium batteries, but researchers previously struggled to develop effective sodium cathodes, the components through which electrons enter the battery.

Scientists propose that their new bone-inspired design solves the problem of cathode instability.

“We believe nature offers a promising solution for solving technical problems,” study co-author Ho Seok Park, a researcher at Sungkyunkwan University in Korea, said in a press release. “Accordingly, we tried to find the ideal architecture that would overcome these kinetic and stability limitations.”

For the porous inner material, the researchers used Na3V2 (PO4) 3, a sodium superionic conductor compound called NVP. The researchers surrounded the material with a thick layer of reduced graphene oxide, or rGO.

NVP enables the rapid transport of sodium ions, but is inherently unstable. The layer of rGO made the cathodes more stable and prevented the damage caused by electrochemical and mechanical stress.

After 10,000 discharge and charge cycles, the NVP-rGO combination retained 90 percent of its capacity.

Despite the promising performance of their battery, the researchers suggest that more testing is needed before they’re ready for commercial use. 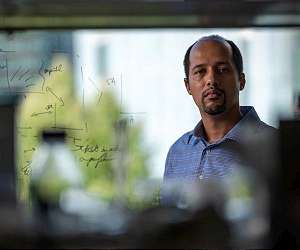 Fikile Brushett is looking for new ways to store energy


Fikile Brushett, an MIT chemical engineering professor, had an unusual source of inspiration for his career in chemical science: the character who played Nicolas Cage in the 1996 film The Rock. In the film, Cage portrays an FBI chemist who is hunting down a group of villainous US soldiers who command chemical weapons and have taken over Alcatraz Island. “For a long time I really wanted to be a chemist and work with chemical warfare agents for the FBI. That was that … Read more

How to decide on the fitting renewable vitality answer on your...