Researchers at Hiroshima University in Japan have mixed together various polymer and molecular semiconductors as photo absorbers to create a solar cell with increased energy efficiency and power generation. These types of solar cells, called organic photovoltaics (OPV), are devices that generate electricity when light falls on their photo absorbers.

The efficiency of a solar cell is determined by comparing how much electricity is generated and how much light falls on the cell. This is known as “photon harvest”, or how many light particles are converted into electrical current. The more efficient the solar cell, the cheaper and more pragmatic the cell is for commercial use.

The Graduate School of Advanced Science and Engineering team added just a small amount of a compound that absorbs long wavelengths of light, resulting in an OPV that was 1.5 times more efficient than the version without the compound.

The compound could improve the absorption intensity due to the optical interference effect inside the device. The group also showed that their distribution is key to further improving power generation efficiency.

“The addition of a very small amount of a sensitizing material to an OPV cell made from a semiconductor polymer that we developed previously and along with other materials,” said Itaru Osaka, correspondent author of the paper, published in Macromolecules in November 2020.

“This results in a significant increase in photocurrent and therefore power conversion efficiency due to the increased photon absorption created by the optical interference effect. A key is the use of a very specific polymer that allows us to have a very thick semiconductor layer for OPV- Cells that significantly improve the optical interference effect compared to a thin layer. “

For future work, Osaka has set its sights on exceeding the limits of the most modern solar cells.

“Our next step is to develop better semiconducting polymers as hosts for this type of OPV and better sensitization materials that can absorb more photons in the longer wavelength ranges. This would lead to the realization of the world’s highest efficiency in OPV cells.” 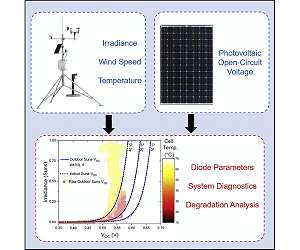 
A new system for long-term measurement of solar power in scalable photovoltaic systems, developed by researchers at Arizona State University, represents a breakthrough in the cost and longevity of interconnected power supplies. As solar cells are developed, the laboratory tests them on “electricity Voltage “tested before being used in panels and systems outdoors. Once installed outdoors, they are usually not retested unless the system exhibits major problems. The new test system, Suns-Voc, I … read more

“BIS Certification Ought to Be a Should For All Authorities Tenders”,...