Indian Prime Minister Narendra Modi laid the foundation stone on Tuesday for what he believes is the largest renewable energy park in the world, which is expected to produce 30 gigawatts of electricity.

The huge project in the Kutch region of western Gujarat state, covering 72,600 hectares (180,000 acres) – the size of Singapore – will include solar panels, solar energy storage and windmills.

“The hybrid park for renewable energies will be the largest in the world and generate 30,000 megawatts of electricity,” said Modi at the inauguration of the energy park and an adjacent desalination plant.

“Energy and water security are critical in the 21st century,” said Modi. “The two major renewable energy park and desalination plant projects launched today in Kutch are steps toward both of these goals.”

The 70-year-old Modi said this would also help the second most populous country in the world cut its carbon dioxide emissions by up to 50 million tons per year.

The desalination plant can process 100 million liters of water a day for 800,000 people in the arid region bordering Pakistan. 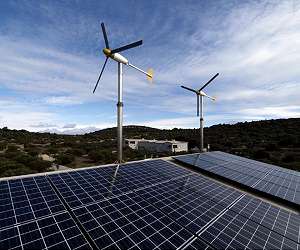 The environmental value of renewable energies varies from place to place


New investments in green energy will not have the same impact everywhere, researchers say. According to a new study published Monday in Nature Sustainability magazine, some places will achieve greater environmental benefits than others from renewable energy sources. “For years, researchers have taken different approaches to assess the environmental benefits of renewable energies,” said study co-author Harrison Fell in a press release. “The Energy Information Administration is starting … read more

Sure, you CAN cost your Tesla with moveable solar!!!